The Facts about Rabies for Pets and Owners in Cambodia

The Facts about Rabies for Pets and Owners in Cambodia

28th September is World Rabies Day! Protect yourself and your furry friends with appropriate vaccinations!

Rabies is a viral disease that affects the nerves and brain. It is transmitted from animals to humans. It is 100% fatal once symptoms appear.

Which animals can get rabies?

Any mammal can get rabies, although it mostly affects carnivores (meat-eaters) and bats. Dogs are responsible for 96% of human rabies cases in South-East Asia, but there are also reports of human rabies due to bites of cats, mongooses, jackals, foxes, wolves and other carnivorous animals. Rabies due to monkey and rat bites are rare. Horses and donkeys get aggressive and bite ferociously when they are rabid. Cattle and buffaloes do not bite when they are rabid, but precautions should be taken while examining sick animals that are salivating.

What are the symptoms of rabies in animals?

There are two different presentations of rabies in animals – the “furious” form and “dumb” or “paralytic” rabies.

Furious rabies is the classic “mad-dog” syndrome, although it occurs in other animals as well as dogs. Animals will viciously attack using teeth, claws, horns, or hooves at the slightest provocation. Such animals lose fear of people and other animals. Previously shy puppies may seek human companionship and are overly playful, but bite even when petted, usually becoming vicious in a few hours. Paralysis and death follow within a few days.

Paralytic rabies initially presents as in-coordination and profuse salivation. Dropping of the lower jaw is common in dogs. These animals may not be vicious and rarely attempt to bite. The paralysis progresses rapidly to all parts of the body, and coma and death follow in a few hours.

What are the symptoms of rabies in humans?

– Pain or itching at the site of the bite wound
– Fever, malaise, headache lasting for 2–4 days
– Hydrophobia (fear of water)
– Intolerance to noise, bright light, or drafts of air
– Fear of impending death
– Anger, irritability, and depression
– Hyperactivity
– Spasms in the neck and throat (late stage)
– Paralysis and death

How do humans catch rabies from animals?

Rabies is not transmitted by consuming cooked meat or milk from infected animals.

How long does it take to develop rabies after you have been exposed?

It can take as little as a few days or up to a year for the symptoms of rabies to develop, this time period is referred to as the incubation period. It depends on several factors including the severity of the bite and the location of the bite. Bites that are close to the head or in areas with a lot of nerve endings (e.g. fingertips) tend to have a shorter incubation period as it takes less time for the virus to reach the brain.

What should you do if you have been bitten?

First Aid measures:
– WASH the bite wound with soap and flush with running water for 10 to 15 minutes
– Clean the wound with an antiseptic such as alcohol or iodine
– Get to a clinic or hospital as soon as possible

DO NOT:
– Apply any natural remedies such as chili powder, plant juices, or anything caustic
– Cover the wound with a bandage or plaster

What will happen at the clinic or hospital?

Is there any treatment for rabies?

Once symptoms of rabies have developed, there is no treatment. Rabies is 100% fatal to animals and humans.

How can rabies be prevented?

Effective vaccinations against rabies are available for both humans and animals. Anyone considered to be at a high-risk for rabies exposure (such as animal health workers) should be vaccinated as a preventative measure. Vaccination of stray dogs is the most effective method for reduction of human rabies cases.

For more information, there are many excellent resources available at https://rabiesalliance.org/resources/factsheets/ 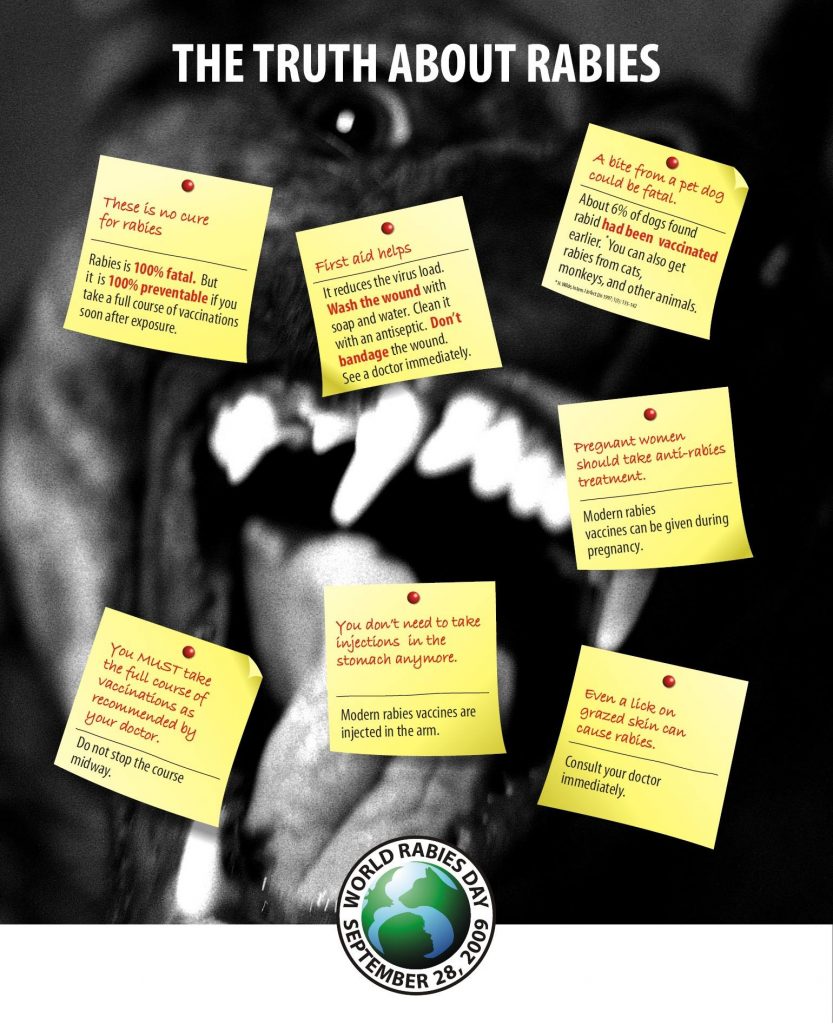